Designed by Artists, Signed by Footballers 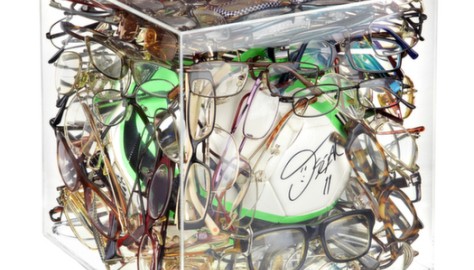 Following their brutal thrashing last night, I am adding a p.s. – Brazil may have lost the semi final but the children should not lose out. Read on…

Football is a passion of mine which is what first attracted me to this scheme. ABC Trust (Action for Brazil’s Children Trust) have managed to combine art, which is also one of my interests, football and altruism as an original way of raising money. They are a UK based charity that helps at risk children in Brazil gain the right to a safe childhood and good education by providing local community services and a general positive influence. Since the world cup has started once again, and this year in Brazil, the charity has come up with a brilliant and timely way of raising money for the thousands of children helped each year: Art of Futebol. Incredibly, they have organised 11 of the best Brazilian footballers of all time to sign footballs. These will be sold at auction with all money going to the charity, on July 10th at the Brazilian embassy in London. Currently the balls are at Selfridges, Oxford Street, and are on display for the public to view until July 9th. It is definitely worth a trip to go and see them. The 11 players who have taken part are the legendary Romario, Ronaldo, Ronaldinho, Falcao, Zico, Rai and arguably the best player of all time – Pele. There are also current Brazilian players taking part: Oscar Emboaba, David Luiz, Neymar dos Santos and Ramires. The balls have not only been signed by some of the greatest footballers ever, they have also been designed by outstanding artists from Brazil and elsewhere. The vast amount of thought, imagination and creativity which has gone into the designs really does capture Brazil as a nation, which is absolutely amazing. Each ball has its very own character and message which I found powerful. A personal favourite of mine is Oscar Emboaba’s signed football, designed by sculptor Tolleck Winner, because of his beautiful message which shows how individual people see Brazil differently. The ball is covered with reading glasses and Tolleck says “These glasses, originally donated to Boots optician by the young, old, middle aged and those passed on, represent how people live their lives from different perspectives and everyone has a different view of Brazil. What is important is that we respect one another and try to bring peace and kindness to the children of Brazil“. Other designers are Inkie, Pakpoom Silaphan, Cibelle, Rob and Nick Carter, Pure Evil, Nasser Azim, Patrick Hughes, Jimmy Galvin, Richie Culver and Static. Bidding for one or even going to view these balls is definitely worth considering if you are in London as it is a once in a lifetime opportunity. The footballers are magicians on the pitch, the artists are magicians of creativity, and the chemistry between them is a real blend of excellence. However the true magic comes with the charity’s work and their imaginative fundraising strategies which are so beneficial to the young Brazilians of tomorrow. They have really hit the back of the net with this one!

To find out more about ABC Trust and their campaigns.