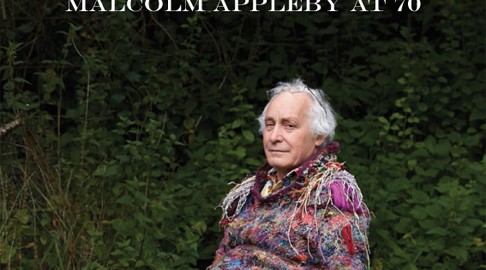 The Scottish Gallery published a paperback Malcolm Appleby at 70 to coincide with their January 2016 exhibition celebrating the artist, silversmith and engraver’s 50 year + “creative tour de force”, a slim volume well worth adding to your library. The Gallery, which has been associated with Malcolm since the 70s, commissioned an essay by Elizabeth Moignard, Professor of Classical Art and Archaeology at the University of Glasgow, previously Dean of the Faculty of Arts, to provide a sympathetic and knowledgeable insight into Malcolm’s studio practice and career. Most of the images are by Malcolm’s wife, Philippa Swann, who perfectly captures the intricate detail, rich textures and natural tones in his work. The book’s cover features a wonderful 2015 portrait shot by David Eustace of the artist wearing his signature darned and embellished sweater (beautifully described by Moignard as “that interpolated palimpsest”), with 2 other takes included within the book. Apart from the Foreword by Scottish Gallery Director Christina Jansen, Moignard’s essay provides the main text, leaving a selection of works, predominantly later pieces which appeared in the exhibition, to speak for themselves. These are comprehensively captioned and interspersed with quotes including Edward Lucie-Smith’s: “His work doesn’t accept limitations. It reaches out; it makes comments on the kind of world we live in.” The social, environmental and political comment which Malcolm often engraves into his work is also discussed by Moignard. Malcolm’s collaborative spirit is ever present and some key contributors are name checked notably fellow silversmith Peter Musgrove, with whom he has worked on a number of pieces since 1974, and the enameller Jane Short, another long time friend and creative partner.

The publication is completed with key dates for Education and Awards, Studios (just 3 in all those years: West Wickham, Crathes and Grandtully), Selected Solo and Museum Exhibitions, Selected Commissions and a list of key Public Collections. You can purchase a copy of Malcolm Appleby at 70 (44 pages) from the Publications page of The Scottish Gallery for £7.50 including delivery.