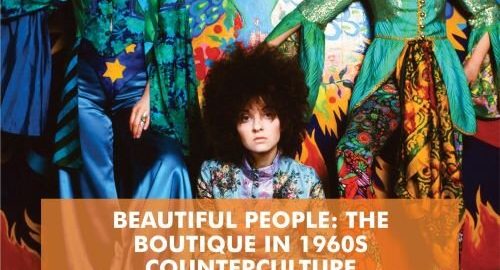 ‘Beautiful People: The Boutique in 1960s Counterculture’, an exhibition at the Fashion and Textile Museum in London, explores how a handful of Chelsea boutiques sparked a fashion revolution in the mid-1960s. Here we review ‘Beautiful People Photographs 1966 to 1973’, the dedicated accompanying photography show in the museum’s upstairs gallery space.

This rich visual representation focuses on the faces and the fashion, illustrating how contemporary photographers, designers and the media suggested and amplified new trends. A kaleidoscopic wealth of original material is on display including rare prints, vintage magazine covers, newspaper articles and collectors’ album covers.

Much of the featured press coverage spotlights the looks, lives and tastes of the rich and famous, together with the boutique owners, musicians, artists, aristocrats and models who coloured the scene. These celebrities of the day became known collectively as The Beautiful People, a description magnified by their clothes, which transcended utility as their wearers embraced the theatre of dressing up.

“‘Beautiful People Photographs: 1966-1973’ presents the key personalities of this era who showcased the vibrant fashion boom that sprang from London’s boutique phenomenon, beginning in 1966 when ‘Time’ magazine told its international readership that London was the centre of the Swinging 60s. The counter-cultural fashion world for the next few years was expressed most vividly through magazine photographs of celebrities of the time such as Pattie and Jenny Boyd, Twiggy, Marsha Hunt, Jimi Hendrix and the Ormsby-Gores.“

As the above extract from the exhibition notes suggests, the varied selection of images and memorabilia on the gallery walls sheds light on many of the key characters. Co-curated by Terence Pepper and Grace Lee, the gallery space concentrates on portraits. Pepper expands, “‘The Beautiful People Photographs’ section of the exhibition, which fills the Studio Gallery at the FTM ,was curated by Grace and myself to focus on some of the lesser known visual highlights through portraits of leading players, along with acknowledged iconic LP covers and magazines of the time, as well as great original photographs.”

Diversity was a keen consideration in the show, reflecting a shift in social culture which was consolidated in London’s Swinging Sixties. Queen magazine commissioned a shoot with Marsha Hunt, three months after she had joined the cast of Hair in 1968, and she then became the first black model to appear on their cover, gracing the high profile Christmas issue. Pepper highlights that image (see above) as particularly significant also drawing attention to the eye-catching, “very colourful group photo with Kellie Wilson, and an as yet unidentified model, with Pattie Boyd, all wearing clothes from the Beatles’ short-lived shop in Baker Street named Apple.”

Pepper then talks us through the birth of the English Boy Ltd Model Agency, which represented ‘pretty boys’, many from well-to-do families, rather than going for the more traditional men’s looks and physiques championed by American agencies at the time, “English Boy was founded in 1966 by Mark Palmer with Kelvin Webb, Tricia Locke and José Fonseca. They created a new look for male models, with recruits from the Chelsea set. Originally there were just 12 males, but the agency very soon had 50 and then added female models, with many becoming big names.

The Agency’s offices were on the 3rd floor of the same building at 52 Radnor Walk, SW3 where Alice Pollock and Ossie Clark’s boutique Quorum occupied the ground floor. Brian Jones of the Rolling Stones also lived there with Suki Potier. Models signed by Sir Mark Palmer (he was a baronet) included Peter Hinwood, Julian Ormsby Gore, Nigel Waymouth, David Milnaric, the Myers twins and James Fox as well as female models and other beautiful people including Linda Keith, Jenny Spiers, Chrissie Shrimpton, Amanda Lear and Ingrid Boulting. When Palmer lost interest in the agency in 1968, José Fonseca went on to found Models One.“

We asked Lee how a presumably vast pool of original vintage material had been narrowed down for the exhibition and she said, “1966-1973 was such a ‘happening’ era that we could have easily just focused on 1966 and had enough material. My magic word throughout the organisation of the exhibition was ‘slideshow’, as a projection of extra images was going to feature in the room. Originally, we had selected many more photographs to be exhibited, but because of limited wall space we included these on the slideshow instead, as well as many extras from the Terence Pepper Collection and other lenders.”

The Sixties were a markedly dynamic time in British fashion history and the ‘excess’ of material referred to by Lee permeates all aspects of this Fashion and Textile Museum show. Overall it is an exciting exploration of the kaleidoscopic range of shapes, colours, patterns and decorative styles, as well as the movers and shakers behind these far-reaching new trends.

The Beautiful People were central in fuelling a fashion and culture revolution. As the main show’s promotional material reveals, ‘changing attitudes towards gender and sexuality, framed by the socio-political climate of the time, inspired new ideas, freedom of expression and opposition to establishment values…. a generation of radical young designers emerged, catering to an elite group of artists, aristocrats and musicians: The Beautiful People.’

The large spaces within the Fashion and Textile Museum concentrate on several now legendary independent boutiques, many selling second hand and one-off items, crystalising their DNA in a series of showcases with mannequins in original outfits. These are supported by inter-connected posters, flyers and artwork panels looking at diverse historical, cultural and geographical influences.

The photographic collection, arranged in an approximate chronological order, enriches the shop-centric displays concentrating on the creative people who wore, promoted or dreamt up the spaces and the looks, which were an exciting blend of the retrospective and the avant-garde.

Pepper tells us about a significant find, just before the exhibition opened, “an extremely rare issue of the British edition of Life magazine was discovered a few weeks before the delayed show opening (due to Covid) in October 2021. The UK editions mainly consisted of reprints of articles from the US version but occasionally featured ‘not run in the US’ content. This particular issue is shown here for the first time in a 1960s exhibition and has not so far appeared in any of the many books on Swinging Sixties culture.

The cover shows a colour photograph centred on brilliant designer Ossie Clark, standing in front of the black and white wall mural drawn in the style of 1890s artist Audrey Beardsley. Beardsley’s 1966 retrospective at the Victoria and Albert Museum had far reaching impact on 60s design, as illustrated by the artist Anthony Little in his life size contemporary dandies, drawn in black ink on the back wall of the Hung on You boutique founded by Michael Rainey and Jane Ormsby-Gore.

Another high-profile Beardsley inspired graphic, which we show next to this special edition of Life, is the cover of The Beatles’ first progressive album, Revolver, as designed by Klaus Vorman.”

While the exhibition is thoroughly researched and highly informative, it also has a playful and light-hearted slant, revealing, reflecting and revelling in the era’s mood. Lee describes one of her favourite images in the show, “Clive Arrowsmith’s 1969 photograph of dancers Mimi and Mouse, simply because I love the costumes which they screen-printed themselves. The rich colours and sumptuous textures for me sum up that year of bohemian fashion, and I love the dramatic poses. We had access to the issue of Queen magazine it was published in, but were especially fortunate in that Clive lent us a print.”

‘Beautiful People Photographs 1966 to 1973’ sparkles through the visual elements of the period’s transient, ever-evolving social and street scenes, giving us a first comprehensive glimpse at the burgeoning cult of the individual. Niche vibes generated by gigs, arts events, cliques and clubs spilled their raw energy onto the streets, feeding on and into 60s pop culture in general, and setting the creative tone and energy that has continued to permeate many subsequent decades, right into the present day.

Beautiful People Photographs 1966-1973, part of the Beautiful People: The Boutique in 1960s Counterculture exhibition at the Fashion and Textile Museum, runs until 13 March 2022. Visit the museum’s website for tickets, times and more information.

Review text by © Emma Boden, 2022, with thanks to Terence Pepper and Grace Lee for their assistance; images © photographers/rights holders as captioned.